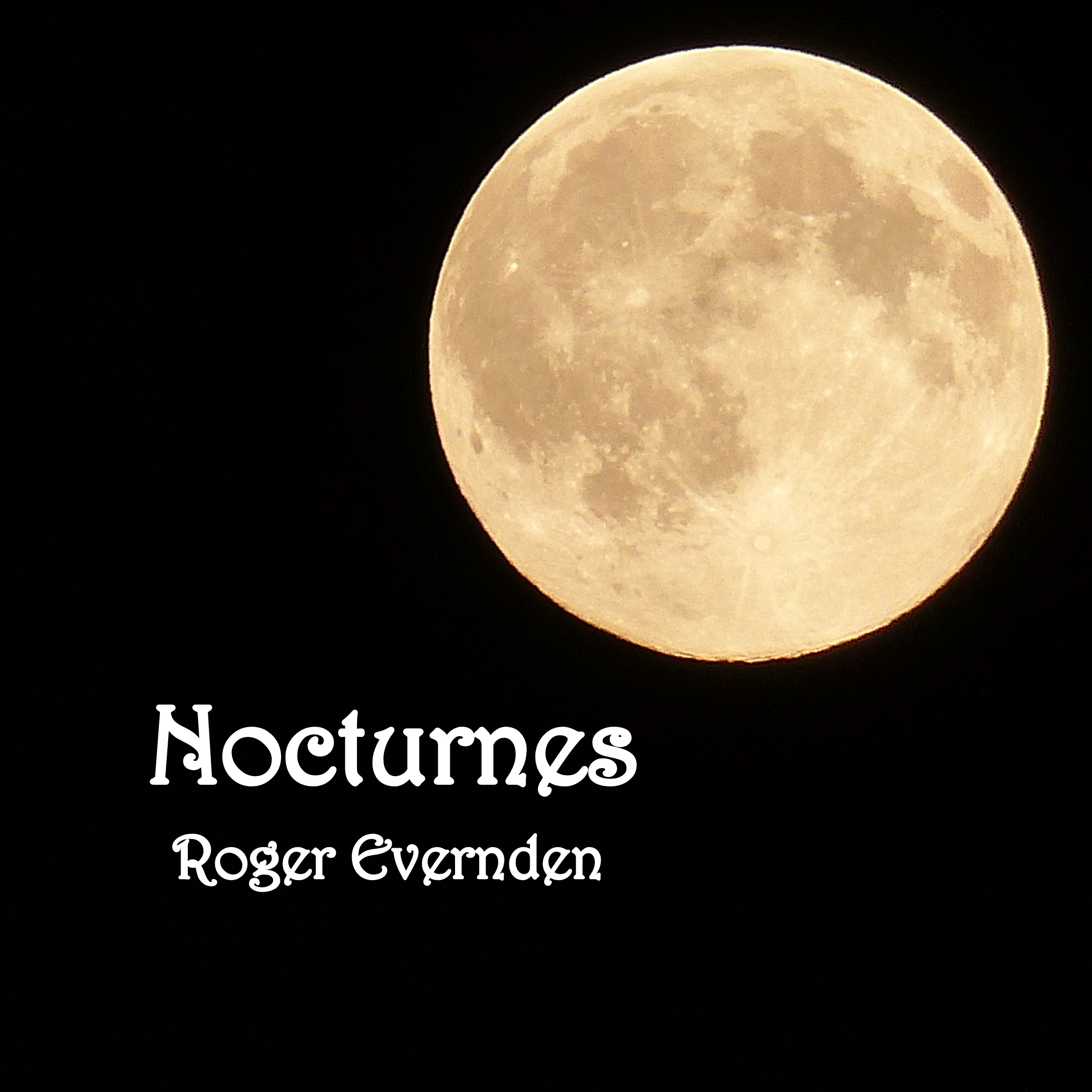 Like most of my albums, this collection has gone through several names during its birthing process.

I considered all of the pieces nocturnes because they all started as improvisations that I played in the evening. The early ones were recorded when we lived in Upper Hartfield, a small hamlet in Sussex in England – very close to the bridge where Winnie the Pooh played Pooh Sticks with Christopher Robin.

That was many years ago, and it has taken me some time to work with those early improvisations and turn them into compositions. But to me they still felt like nocturnes.

The set of 10 Nocturnes were written over a number of years. They are reflective pieces, all composed for solo piano by Roger Evernden. They are reminiscent of the haunting, meditative compositions on earlier albums – like Serendipity 1, 2 and 3 on The Journey We All Make album; or April Sadness or Solitude on The Innocence of Spring album, and the hugely popular Late At Night I Think Of You from Improvation.

[If you are interested in the background to Nocturnes in general, and why they are called that, you might find this article on Nocturnes on Wikipedia interesting.]

“It is rare to hear music that deviates from fairly predictable and traditional compositional structures. These Nocturnes are fresh, organic pieces. Wonderfully distinct. Each is different yet they combine to form a pleasing and enjoyable whole. Calming and gentle, individual and unique.”

The album was released in February 2019, but several of the Nocturnes were also released as singles.

The first Autumn Nocturne is an evocative solo piano tune – based around the many different aspects of our souls.

Sea of Souls is a gentle, flowing piece. It starts slowly with a simple single line theme, before developing into a haunting repeated pattern in the right hand and a beautiful melody in the bass. Just over half way through a hypnotic chord pattern in the right hand is underlined by a heartfelt bass melody, before ending with a reference back to the original single line theme.

This solo piano track from Roger Evernden is the second in the Autumn Nocturnes series.

Eternal Hope has a poignant, sparse, melancholy melody that repeats before moving into a sad variation and tender ending that makes you want to listen again and again. May there always be Eternal Hope in your life.

Like the other Autumn Nocturnes, Mist is a gentle and reflective piano solo – perfect for relaxation, meditation, or study.

Distinctively Roger Evernden, Mist evokes the early morning mists that so often herald the start of a beautiful sunny autumn day. The day starts slowly, gradually emerging from the darkness of night with the slow-moving greyness of dawn.

Silent Heart is the fourth of the Autumn Nocturnes solo piano series by Roger Evernden.

“And verily he will find the roots of the good and the bad, the fruitful and the fruitless, all entwined together in the silent heart of the earth.”

I was thinking about the damage that we do to this lovely planet of ours, and how its heart but be torn by our lack of care. I worked with the idea that everything – good and evil – exists because we are here on planet earth. Without the silent heart of the earth we would be nothing.

Playful Winds is the 5th Autumn Nocturne for solo piano by Roger Evernden.

The title, Playful Winds, was inspired by another line from Kahlil Gibran in The Prophet –

Thistle Dew is the 6th Autumn Nocturne, composed and arranged for solo piano by Roger Evernden.

Thistle Dew is the name of a house that we lived in – it’s a lovely play on words, and it’s only a short walk from Pooh Bridge, where Winnie played pooh sticks with Christopher Robin.

“For in the dew of little things the heart finds its morning and is refreshed.”

There is a lovely rolling bass line that is repeated with a melody that seems to build and build over the top.

Where the Ocean Meets the Sky – Julie Hanney

The story behind: The Journey We All Make

"Roger's new album Ebb and Flow is a gentle and profound journey of heartfelt music that is both simple and complex. The harmonies and melodies on this album are uniquely "Roger" and his graceful, unhurried style of playing allows the listener to feel comforted and gently led through the experience. He is obviously inspired by nature and by the amazing experience of being alive. I found myself feeling deeply as I listened. Each song evoked new thoughts, memories and longings and is a beautiful work of art. "

"A creative and beautiful mix of piano music by a talented composer and pianist! I hope many listeners find Roger Evernden's album, Ebb and Flow."